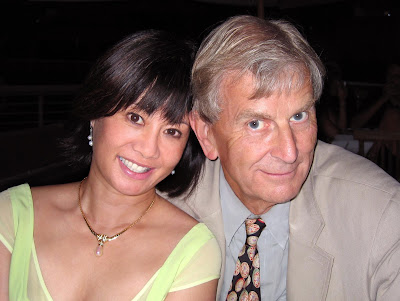 I never met Andrea Eng during the 1980s, when she was at the epicentre of commercial real-estate sales activity here. But I knew plenty about her. I was editor of Vancouver magazine at the time, and Andrea’s photo appeared regularly in the columns we ran about doings around town. When our reporters and photographers came back from  charitable, political and business events of any magnitude, there she would be, seemingly floating among the assembled heavy hitters.

And always smiling. Not the rivetted-on beam of the national beauty queen we knew she’d been, but the half-surprised smile of someone who might have had just found out that everyone else’s eyes were on her. She was arresting, no question about that, even in black and white flash photographs taken in crowded rooms. But when photographers had the advantages of time and studio lighting, they portrayed her as more than arresting. Hypnotizing may be the word for it.

It’s a cliché to say the camera loved her But it was true. So did the magazine art directors who decided what to do with the photographs they’d commissioned. Their decision, inevitably, was to run them as full pages or double-page spreads and, where possible, on the cover, too.

Andrea had eye appeal. And, again, not just the kind you see on a beauty pageant runway. I can’t recall anyone saying “glass ceiling” then.  But even if they had, the photos of Andrea radiated the impossibility of that term having anything to do with her. You simply knew from her style and expression that here was someone who could set a goal, achieve it and then set a tougher one.

One knock you sometimes heard then, and even occasionally today, was that Andrea promoted herself better than she did her employer, the Collier Macaulay Nicolls s realty. Well, whoopee-do! As if hundreds — thousands — of like-aged ambitious men didn’t do exactly the same as they scaled or sidestepped the challenges of a business world that depends upon the best succeeding.

I would see her sometimes during her visits to Vancouver. Sometimes she would entertain some of the above dignitaries and others in her Shaughnessy home. Always, she would be decorous, but with the friendliness no one can feign. It was impressive to see, and would doubtless have satisfied Emily Post or her teachers at Crofton House private school for girls. What was more impressive was that she was as hospitable and acted just the same in every way when the only visitor was me.

And adaptable? Once, when  a photograph was needed for the newspaper, and the best light conditions pertained beneath the window of her off-kitchen washroom, Eng unconcernedly plunked herself down on the closed toilet seat, smiled at the camera and created the same hypnotic spell she had a decade earlier.