Andrea and her work has been the subject of a number of magazines including the following: 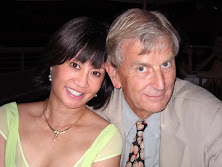 <<  Double click cover to view full article
I never met Andrea Eng during the 1980s, when she was at the epicentre of commercial real-estate sales activity here. But I knew plenty about her. I was editor of Vancouver magazine at the time, and Andrea’s photo appeared regularly in the columns we ran about doings around town. When our reporters and photographers came back from  charitable, political and business events of any magnitude, there she would be, seemingly floating among the assembled heavy hitters.

And always smiling. Not the rivetted-on beam of the national beauty queen we knew she’d been, but the half-surprised smile of someone who might have had just found out that everyone else’s eyes were on her. She was arresting, no question about that, even in black and white flash photographs taken in crowded rooms. But when photographers had the advantages of time and studio lighting, they portrayed her as more than arresting. Hypnotizing may be the word for it.

It’s a cliché to say the camera loved her But it was true. So did the magazine art directors who decided what to do with the photographs they’d commissioned. Their decision, inevitably, was to run them as full pages or double-page spreads and, where possible, on the cover, too.

Andrea had eye appeal. And, again, not just the kind you see on a beauty pageant runway. I can’t recall anyone saying “glass ceiling” then.  But even if they had, the photos of Andrea radiated the impossibility of that term having anything to do with her. You simply knew from her style and expression that here was someone who could set a goal, achieve it and then set a tougher one.

One knock you sometimes heard then, and even occasionally today, was that Andrea promoted herself better than she did her employer, the Collier Macaulay Nicolls s realty. Well, whoopee-do! As if hundreds — thousands — of like-aged ambitious men didn’t do exactly the same as they scaled or sidestepped the challenges of a business world that depends upon the best succeeding.

I would see her sometimes during her visits to Vancouver. Sometimes she would entertain some of the above dignitaries and others in her Shaughnessy home. Always, she would be decorous, but with the friendliness no one can feign. It was impressive to see, and would doubtless have satisfied Emily Post or her teachers at Crofton House private school for girls. What was more impressive was that she was as hospitable and acted just the same in every way when the only visitor was me.

And adaptable? Once, when  a photograph was needed for the newspaper, and the best light conditions pertained beneath the window of her off-kitchen washroom, Eng unconcernedly plunked herself down on the closed toilet seat, smiled at the camera and created the same hypnotic spell she had a decade earlier.   -- Malcom Parry 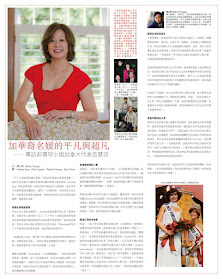 The Outlier: LiveOutside the Box

“Many people believe a beauty pageant is all about ‘beauty’, but I think intelligence carries more  weight than beauty,” said Andrea Eng, Canada’s first Chinese representative at a global pageant, Miss Universe in 1978.

Never an admirer of her own charm or glamor, Eng says the journey that took her there was a mere accident.

She was in her early 20s then but never got carried away.

Instead, she soon dedicated herself to a career in the real estate business, and became an adviser to several Asian tycoons, specializing in investments overseas.

Born and raised in Vancouver, Eng is renowned in real estate circles for her pioneering role in bringing the East and the West together through her vision and connections.

In the wake of Asia’s rise, many global enterprises nowadays hope to attract Asian investments. As early as 30 years ago, Eng was already identifying investments overseas for Asian investors.

During the 1980s and early ’90s, she brokered investment projects worth C$3 billion a year in Vancouver for Hong Kong investors.

The New York Times once described her as the “first woman to broker commercial real estate to Asians in North America”.

“I believe every person is born with a gift,” Eng said.
“You just have to find your gift as quickly as possible.
“Business is my gift – I’m able to see opportunities differently from anyone else.”

Still, Eng admitted, “you need luck in life”, and her pageant journey is a good illustration. A shy girl since childhood, she had never thought about taking part in a beauty contest. But her mother encouraged her to enter the Miss Vancouver Chinatown pageant in 1977.

Eng initially faced opposition from her father, who believed that women should stick to their family duties as homemakers, although his own wife was a partner with him in the family’s real estate brokerage.

Though his attitude softened later, Eng’s father didn’t bother to watch the final of the contest. “I was not a preferred winner,” Eng said with a smile.

“I wasn’t the most beautiful candidate.
“My dad didn’t even buy a ticket, probably because he thought I wouldn’t do too well.”

In the press reports from that time, Eng won plaudits from the judges and audiences with her Chinese modern dance performance, as well as her wit and eloquence.

“To win a beauty pageant not only requires beauty but also intelligence and knowledge,” Eng said. Eng went on to become the first runner-up at the 1978 Miss Canada contest.

She stepped in to represent the country in the Miss Universe pageant in Mexico when Miss Canada Catherine Swing got married and was disqualified.

Reflecting on her pageant experiences, Eng said she not only expanded her personal network but also was forced to overcome her shyness.

However, her passion never strayed far from real estate.

The family business but not the family firm

“My family ran a real estate business. As early as five years of age, I went to open houses with my father,” Eng recalled.

“Real estate is part of my blood.”

After the beauty contests, Eng’s parents wanted her to go into the family business, but she insisted on challenging herself in the marketplace and joined Colliers International Property Consultants Inc. instead.

The business of selling Vancouver real estate then was dominated by men, Eng recalled, and it was hard for a woman to break into it, let alone a Chinese.

At Colliers, she was assigned to the office in the residential suburb of West Vancouver, instead of the busier and more lucrative downtown Vancouver office.

Nevertheless, within her first three months, she managed to sell a shopping center and two warehouses and became one of the firm’s top brokers.

One day, she decided to stop by Colliers’ downtown office on her way home and asked to meet the department head.

Eng made a request to transfer downtown and wouldn’t take no for an answer.

She said: “I am such a persistent person.”

Eng became the first female broker ever to work in the downtown office.

She recalled being given only a desk and a phone at the beginning and that no other broker wanted to work with her.

Eng admitted having moments of self-doubt during her first few days, but still managed to sell some high-end property within a week.

All told, Eng sold 57 apartment buildings in Vancouver’s West End, accounting for 70 percent of the sales in the area.

As she established her own brand in the real estate sector, more and more brokers reached out to work with her.

Why Asian tycoons trust her

Eng noticed that most brokers weren’t interested in serving clients from Asia.

Her background as a Chinese-Canadian gave her a big advantage with such clients.

As one of the third generation of Chinese immigrants, Eng studied in Chinese schools during her childhood.

Majoring in urban land economics at the University of British Columbia, she also took courses in Asian Studies.

But while many people thought Eng’s Chinese appearance and ability to speak some Cantonese were what won her the trust of Asian tycoons, she said her way of thinking and working were the foundation of that trust.

“I was born and raised in Canada. I got well along with westerners,” she said. “And yet, the way I think is closer to that of Asians.

“While I evaluate the risk and returns of projects prudently, my strategy and style fit in perfectly with those of Chinese people.”

Taking advantage of the time difference between Vancouver, where she lives, and Hong Kong, she makes sure her clients receive useful information in a timely manner.

Finding gold in the desert

Eng has gone on to run her own business as an independent global investment broker advising Asian tycoons.

The scope of projects she has worked on has gone beyond real estate and the Canadian market.

She was even involved in the setting up of Tom.com, an internet portal that grew into Tom Group Ltd. (02383.HK), an online media business that is part of CK Hutchison Holdings Ltd. (00001.HK).

As Eng put it: “I travel around the world and identify ideas that fit my clients. My work is like finding gold in the desert.”

Despite all her success in the business world, money in itself has never been her source of happiness.

Eng, a yoga practitioner and gardening enthusiast, said she enjoys the surprises life brings to her. “I don’t have a bucket list,” she said.
“I find interesting people fascinating.
“I want to surround myself with them.”

This article appeared in Chinese in the Hong Kong Economic Journal’s Lifestyle Journal magazine on Nov. 13, 2015